Conventional Hybrids combine both an internal combustion engine with an electric motor, however they are not primarily fueled by electric. The battery is charged through regenerative braking, where energy is captured and turned into electricity when braking. They do not utilize plug-in charging and are not included as part of the Collaborative.

2. Which type of EV is more cost effective and which is more aligned with climate goals?

BEVs and PHEVs alike both have superior energy-use efficiency and lower total cost of ownership (TCO) compared to their ICE counterparts, while reducing greenhouse gas emissions by up to 50%. The graphic below highlights the annual fuel savings of BEVs and PHEVs compared to ICEs. It is important to note that the emission figures were calculated with current average electricity grid sources; if the electricity supplied were from renewable sources, the emissions would be zero for BEVs and significantly lower for PHEVs (depending on how often electric is used.) 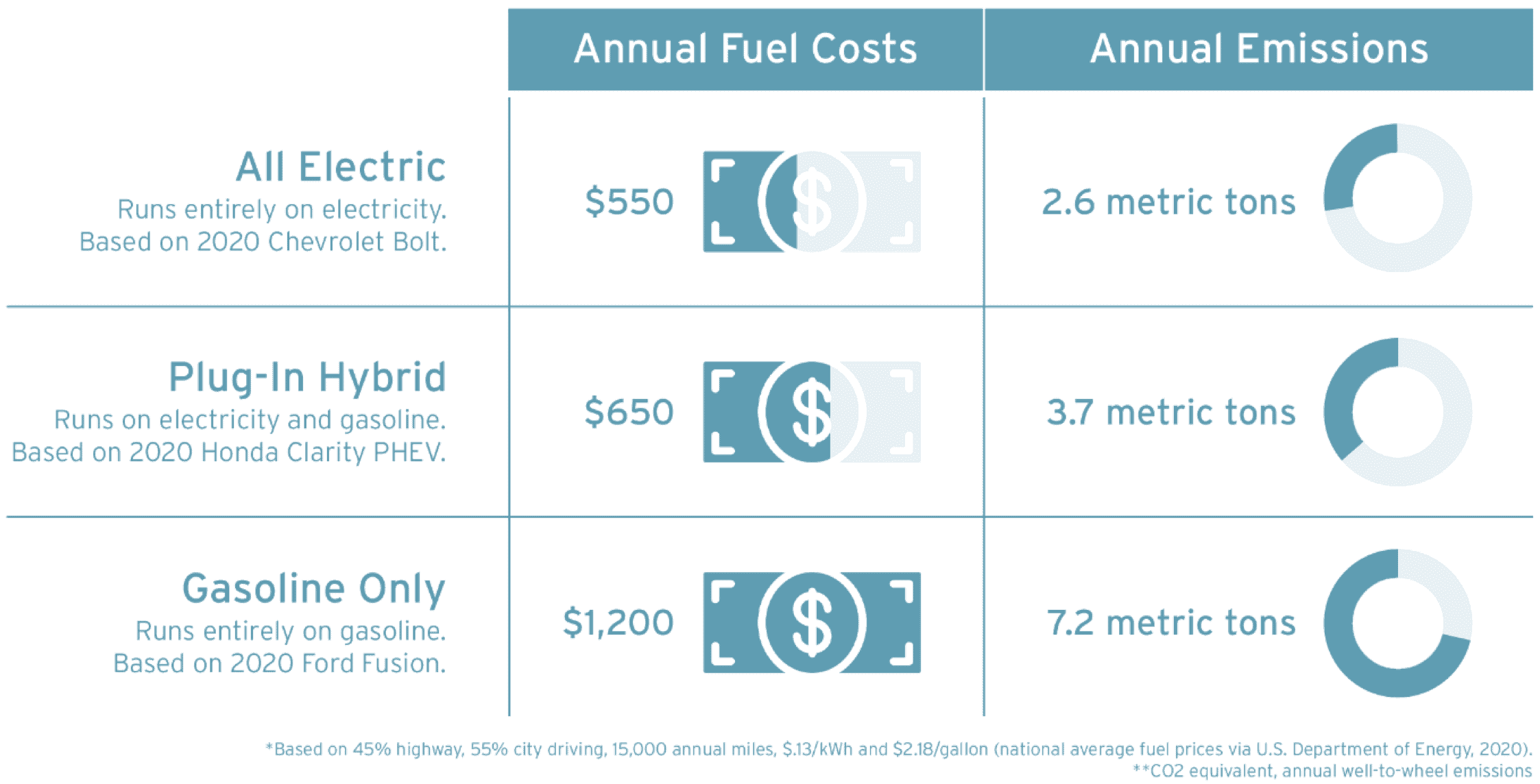 3. How long do vehicles need to charge?

Charging time depends on the size of the vehicle’s battery and the level of charging. There are three types of charging including Level 1 charging, Level 2 Charging, and Level 3 also known as DC Fast Charging. 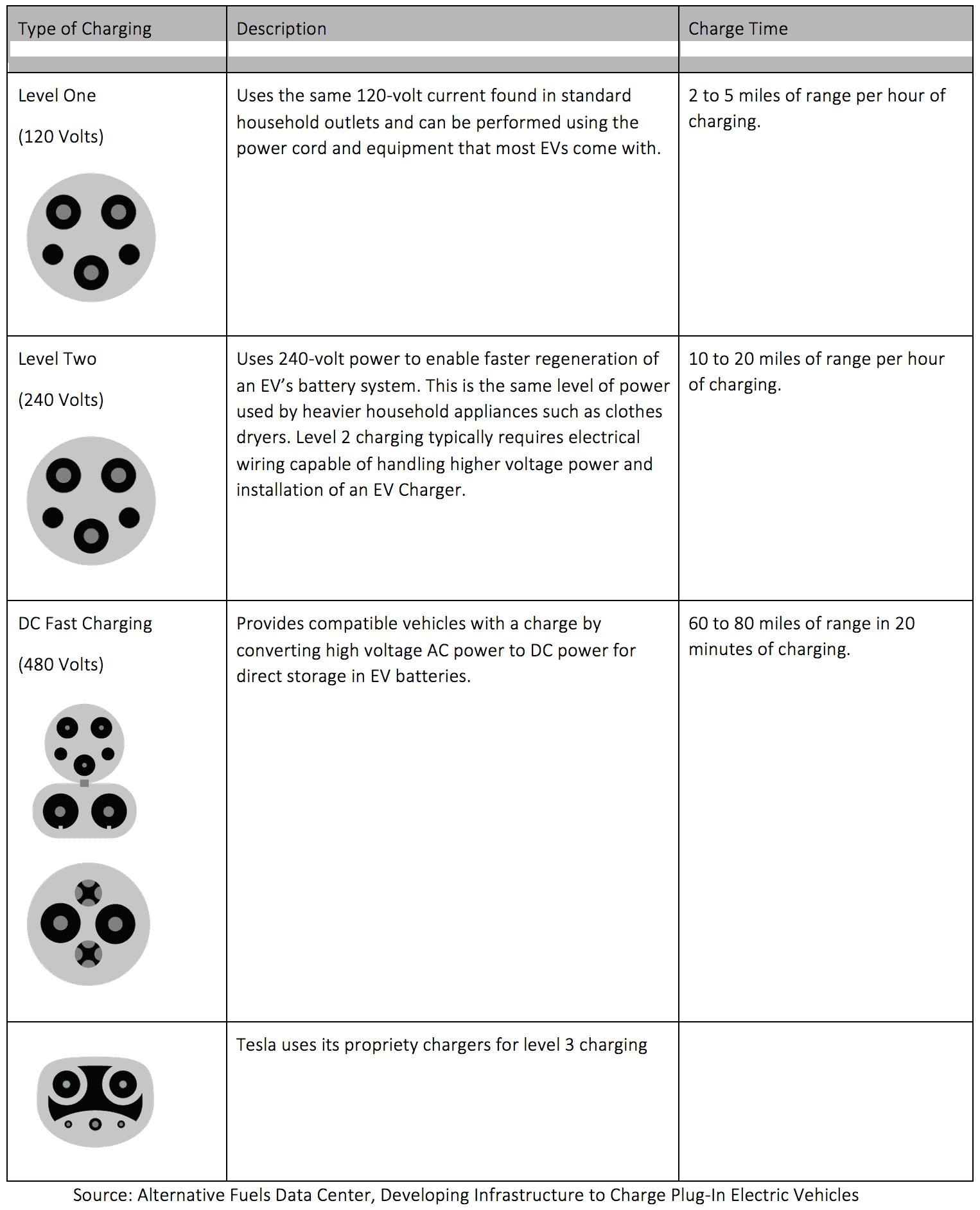 4. Do we need a charging station for every vehicle?

A one-to-one ratio for vehicle to charging is not necessarily recommended, as all vehicles will not need to charge at the same time. The Climate Mayors team can work with your fleet to help identify an appropriate level of charging infrastructure beyond the Level One charging cables that will come with each of your vehicles. Some fleets may want to consider Level Two or DC Fast Charge station for vehicles that are more highly utilized.

Telematics is the use of technology to track the movement and performance of vehicles. The data available from this technology typically includes GPS and performance metrics such as speed, fuel used, and miles traveled. Telematics systems can also access engine diagnostic codes to troubleshoot maintenance issues, monitor battery health, and more. Telematics data is collected by a device connected to the vehicle’s diagnostic systems or engine control unit.

Telematics data is useful in the context of electric vehicles because it allows fleet managers to better evaluate the use needs of each vehicle, identify the best electric replacement options, and more accurately calculate potential fuel and maintenance savings of transitioning to electric vehicles.

6. Where can we get training on maintaining electric vehicles?

Training on maintaining electric vehicles is often available through vehicle manufacturers (OEM). We can work through our contacts at the vehicle OEMs to arrange local training through their dealership networks. Fortunately, EVs require significantly less maintenance compared to ICE vehicles, so they need less out-of-service time. As an example, even most plug-in hybrid EVs often only need oil change services every 2 to 3 years.

7. Are we paying a surcharge per vehicle to be able to use this program?

There is no surcharge per vehicle or cost to participate in the Climate Mayors EV Purchasing Collaborative.

8. Is there a rebate offered for purchasing large volumes? Is pricing negotiable?

This program has already aggregated volume to bring competitive pricing for everyone. As a governmental peer, Sourcewell can leverage its 50,000+ members to secure competitive solutions. As a governmental agency, Sourcewell can work with other governmental agencies through joint powers laws and cooperative purchasing statues, in a not-for-profit manner. Pricing is not negotiable, however certain leasing and purchasing structures may result in incentives that can lower vehicle purchase prices.

9. How is the Federal Tax Credit calculated for a lease? Can I capture a state incentive through leasing?

Leasing can allow public entities to achieve savings from federal tax credits that they otherwise would not have the tax burden for. In a lease, since the private leasing entity retains ownership of the vehicle for the length of the lease term (generally 24 – 36 months), they are eligible to apply for the federal electric vehicle tax credit. The leasing entity then passes on a majority of those savings through in the lease term. Certain leasing structures allow for vehicles to be purchased and owned by the fleet at the end of the lease term.

The leasing companies on contract evaluate the incentive opportunities on a state-by-state basis. To learn more about the cost savings of Electric Vehicle Leasing, check out the case study, here.

10. How is Sourcewell paid for their work in the solicitation and award (funded)?

Through a contract administrative fee with vendors, but that fee is not passed on to members.

11. How are add-ons handled, such as decaling and extra keys?

Decaling and extra keys can be accommodated with additional related costs.

12. Are organizations and entities other than cities (for example: transit agencies not run by a municipality) also eligible to participate in the process?

Sourcewell is open to all public agencies. We have recently partnered with Second Nature to accelerate EV deployment at colleges and universities around the country.

14. How do we train our staff to use the vehicles?

It is helpful to train staff on the use of EVs as there is generally a slight learning curve. Some cities have found it useful to put in place an “EV First” policy, which instructs staff to use EVs before gasoline vehicles if they are available. This simple policy influences staff to try EVs, and once staff have tried them, they find that EVs offer a superior driving experience. Staff should be trained on the range of EVs, faster acceleration, regenerative braking, and charging. The EC can provide instructional resources to assist in this training process.

15. How do we manage public perception of the fleet transition?

Many fleets that have deployed EVs have used the transition as a positive marketing opportunity for the city. With the many benefits that come from driving electric—from cost savings, to fuel savings, to environmental benefits, there are many positive messages a city can promote. Some cities have wrapped the vehicles to highlight these positive messages, and some have worked with the city marketing team to promote the vehicles.