With so many resources, case studies, and documents available on electric vehicles, the Climate Mayors team has assembled some of the most relevant references that directly apply to municipal fleet electrification to help fleet managers, procurement staff, and sustainability/policy team members from the mayor’s office.

Cooperative procurement is a competitive selection process enabled by aggregating the demand various government organizations face. This process can leverage the aggregated buying power of organizations spread across many jurisdictions, retains the competitive selection process, and reduces the personnel burdens on issuing one’s own RFP. When using cooperative procurement, one governmental agency would use a contract issued by another to have access to the same vehicles and pricing. In this program, Sourcewell Cooperative functions as the central organization and has facilitated competitive solicitations, reviewed bids, and awarded contracts. This mechanism has the added benefit of providing fleets with multiple vendors to choose from to ensure each fleet gets a product and an experience that fits their needs.

Traditionally, most municipal fleets purchase vehicles outright through a variety of mechanisms. This typically includes issuance of their own Request for Proposal (RFP) and then awards direct contracts with particular vendors. This program offers a purchasing option through Sourcewell via National Auto Fleet Group.

Fleet leasing with management services are available from a variety of companies offering numerous lease structures/lengths. These leases may or may not also include things like maintenance, fuel, and other services. Leasing can also include the opportunity to take advantage of additional savings on EVs available through monetizing tax credits and passing those savings onto the lessee. Leasing options will be available through Sourcewell via Enterprise and D&M Leasing.

Fleets can finance fleet vehicles more like they would a personal vehicle. This would constitute a leasing option that would provide vehicles without the additional fleet management services. Leasing can also include the opportunity to take advantage of additional savings on EVs available through monetizing tax credits and passing those savings onto the lessee. Financing options are available through Sourcewell via NCL Government Capital.

Plug-in electric vehicles can be charged using standard outlets (110V), which is called Level 1 charging. They can also be charged at Level 2 stations (240V), or at DC Fast Charge stations (480V). Level 1 charging will charge a vehicle completely in 8 to 17 hours, depending on the size of the battery in the vehicle. At a Level 2 station, most vehicles will be fully charged in 4 to 10 hours. High energy consuming appliances, such as clothes dryers, use outlets with this voltage. Finally, in order to make charging while away from home quick and convenient, even faster charging stations are being installed in some locations: Level 3 (or DC Fast Charge) stations. DC Fast Chargers can charge a fully depleted Nissan LEAF to 80 percent capacity in 15 to 30 minutes.

Current State of the EV Market

Plug-in hybrid electric vehicle (PHEV) sales fell roughly 6 percent q/q to 29,373 but were still up 29 percent y/y. Sales of the Ford Fusion Energi and C-MAX Energy continued q/q declines and accounted for most of the decrease in the PHEV segment. Ford has nevertheless announced plans of a big $11 billion EV push starting in 2020 with an all-electric performance SUV crossover now codenamed the “Mach 1” (The Verge, 9/9). 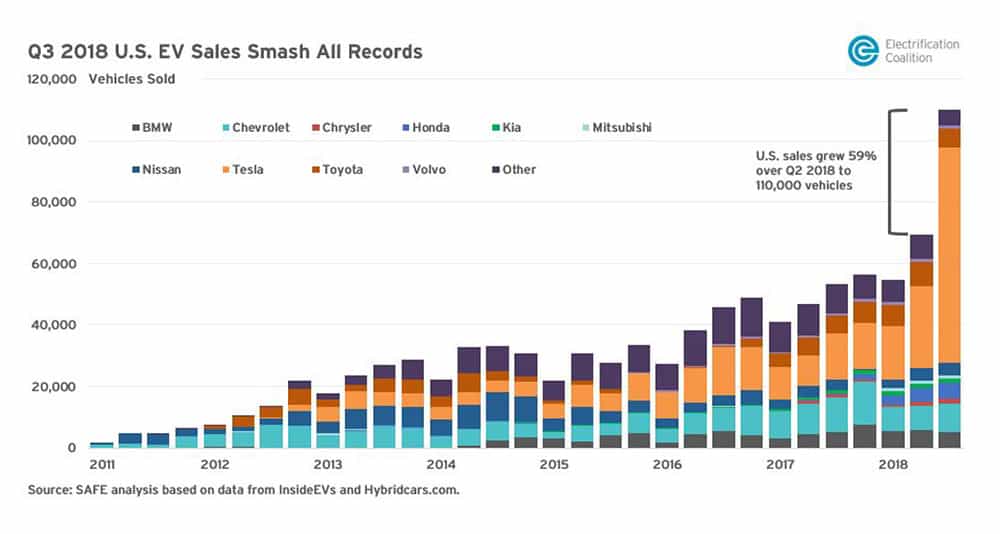