Under the direction of Fleet Procurement Specialist Tom Povormo, UCLA is leading the charge in prioritizing alternatively fueled, low emission vehicles for their institution. In addition to establishing research centers focused on sustainability, the university is creating new technology and training that is impacting the leaders of tomorrow.

Historically, public fleets have prioritized vehicle purchasing over leasing. This may be due to the variety of misconceptions surrounding leasing, including the belief that leases cost more due to high interest rates and concerns over return conditions and mileage restrictions. As a result, fleet managers have lacked low-cost options to maintain a fleet of vehicles that are reliable and low maintenance. In fact, leasing is one of the best avenues for public fleets to incorporate new assets, especially EVs, into their fleet. Fleet managers can achieve significant financial savings by utilizing operating budgets and understanding total cost of ownership.

This case study examines the factors leading to the City of Ann Arbor, Michigan’s adoption of 20 electric vehicles and the historic passage of their A2Zero Carbon Neutrality plan. Through the Collaborative’s resources, Ann Arbor city staff were able to identify suitable fleet vehicles for replacement, connect with other municipalities for development of an EV-Ready ordinance, and gather transit electrification research that contributed to the unanimous adoption of the Carbon Neutrality Plan.

One of the 19 founding Collaborative fleets, Texas’ capital city, Austin, has long been considered on the leading edge of American culture and technology. The City has a reputation for open-mindedness and inclusivity and has seen an 80% increase in population over the last 20 years. As the fastest growing large city in the United States in 2015 and 2016 and home to a number of Fortune 500 companies, the Austin metro area has seen its population expand to nearly 2.3 million residents. The City has been challenged in recent years to manage this significant growth but has risen to the occasion by doubling down on improving livability and prioritizing culture.

This case study examines the factors precipitating the City of Binghamton, New York’s, purchase of two all-electric fleet vehicles, a first for the municipality. Binghamton was also the first city to complete its EV procurement through the Collaborative, spearheading a growing cohort of municipalities across the United States that are demonstrating their commitment to emissions reductions and advanced transportation by utilizing the Collaborative’s convenient procurement solution.

The City of Charlotte has taken a truly holistic approach to EV fleet transition. A combination of ambitious, forward-thinking City leadership and unique cross departmental teamwork has come together to put the City on track to achieve its goal for the City fleet and facilities to be fueled by 100% zero-carbon sources by 2030. City staff convened this cross departmental team with support from the Bloomberg Philanthropies American Cities Climate Challenge (of which Charlotte is one of 25 participating cities), utilizing the resources of the Collaborative to tackle the City’s new EV deployment goals. As a participant in both the Climate Challenge and the Collaborative, the City has been able to leverage support from both programs to advance their goals.

In 2018, the Chula Vista City Council voted to acquire thirty-four new fleet vehicles, including fourteen battery electric vehicles and twenty plug-in hybrid models to replace aging, gasoline-powered cars and trucks that are less reliable and cost more to maintain. These EVs are among the first to be purchased through the Collaborative. This case study examines the motivations behind the City’s decision to electrify its fleet with the help of the Climate Mayors EV Purchasing Collaborative.

This case study examines the factors leading up to the City of Cincinnati, Ohio’s purchase of three all-electric fleet vehicles, two Nissan LEAFs and one Chevrolet Bolt. The purchase comes as part of the city’s aim to reduce overall greenhouse gas (GHG) emissions to 2006 levels by 2050. Using both the Collaborative’s competitive prices on suitable vehicles through Sourcewell and access to a network of policy and technical expertise through the EC, the city has committed to purchasing 20 EVs this year.

Des Moines, the capital of Iowa, has built a reputation for forward-thinking regional planning focused on sustainability. Its dedication to innovative solutions is exemplified through its “Tomorrow Plan,” which calls for centrally planned growth and resource consumption. This focus on innovative sustainability solutions extends to the City’s dedication to EV adoption within the municipal fleet.

This case study examines the factors leading to the City of Winter Park, Florida’s purchase of five all-electric fleet vehicles to be used by the City’s building inspectors. Utilizing the Collaborative’s competitive leasing prices on 2020 Nissan LEAFs, the City saved $6,000 over the Florida state contract and has budgeted for five new Level 2 charging stations to be installed on City-owned property.

Amid the headlines of California banning gas-fueled cars, another movement is shaping the vehicle landscape of the west coast and beyond. Cities, counties, and other public fleets across the U.S. are joining forces to convert their fleets to electric.

Municipalities across the country are leading the charge, and stand to actually save money while reducing transportation emissions. Over 200 public fleets have committed to add more than 3,500 electric and plug-in hybrid electric vehicles to their fleets in the next year as part of the Climate Mayors EV Purchasing Collaborative, a one-stop resource assisting cities to successfully procure and deploy EVs on their fleets.

Faced with the dual threats of climate change and COVID-19, localities across Virginia are waking up to the danger posed by American society’s reliance upon combustion-fueled cars and beginning to look to electric vehicles (EVs) as a solution. In fact, industry leaders and government officials alike believe change must begin with governments’ own fleets first.

November 21, 2019 | Here are the cities that are leading in electrifying transportation | GreenBiz

Over 5 million electric vehicles (EV) were on the road at the end of 2018, in the form of electric cars, trucks and buses. In 2018, 2 million of those EVs were added, reported the IEA.

Electric vehicle advocates from the public sector were out in full force this past June, with representatives from 127 US cities gathering for the second annual Climate Mayors Summit in Honolulu, Hawaii.

A Year of Growth and Impact

When the Collaborative launched, the program had an initial count of 22 cities and counties committed to purchasing 391 EVs. In just one year, this cohort has grown nearly tenfold to include more than 160 cities, counties, public transit agencies, and port authorities that are committed purchasing to more than 2,400 electric vehicles.

The Climate Mayors EV Purchasing Collaborative (the Collaborative) is a partnership between the Climate Mayors, the Electrification Coalition, and Sourcewell. The Collaborative works to reduce the costs and barriers to electrifying fleets to make it easy for public fleets to go electric.  The online portal provides municipalities with equal access to competitively solicited electric vehicles and charging infrastructure, leasing options that can monetize state and federal tax credits, and staff and tools to provide fleet electrification technical support. The Collaborative also provides training, best practices, educational resources, and industry connections, creating a one-stop shop to support electric vehicle transitions for public fleets. This fall, we are celebrating the significant progress that we have made to advance EV fleet transitions since we launched the Collaborative last September.

The Collaborative team has spent this year helping public agencies understand the benefits of EVs and making it easier for them to execute and implement their green fleet goals. Local governments throughout the country have been able to access the most popular vehicle models and reduce administrative time across the board by using the Collaborative.

Looking ahead, the Collaborative partners are focused on expanding the offerings through the platform, including (and going beyond) light duty vehicles. An electric school bus procurement will be opening soon to national vendors. The portal is also poised to add transit buses and medium- and heavy-duty vehicles that are electric. In the short term, we are working to add equipment such as electric street sweepers to continue to reduce emissions and oil dependence. We will also be focused on expanding the reach of the Collaborative as we continue to gather commitments.

Please reach out to EVfleets@electrificationcoalition.org or call 800-267-7830 to find out more and join the cohort of leading cities that are expanding the transformative impact of the Collaborative!

Climate Mayors EV Purchasing Collaborative Announces More Than 140 Cities and Counties Have Committed to Purchasing Over 2,100 EVs by 2020

The Collaborative also unveiled plans to release a new, competitive bid to add electric school buses to the platform. 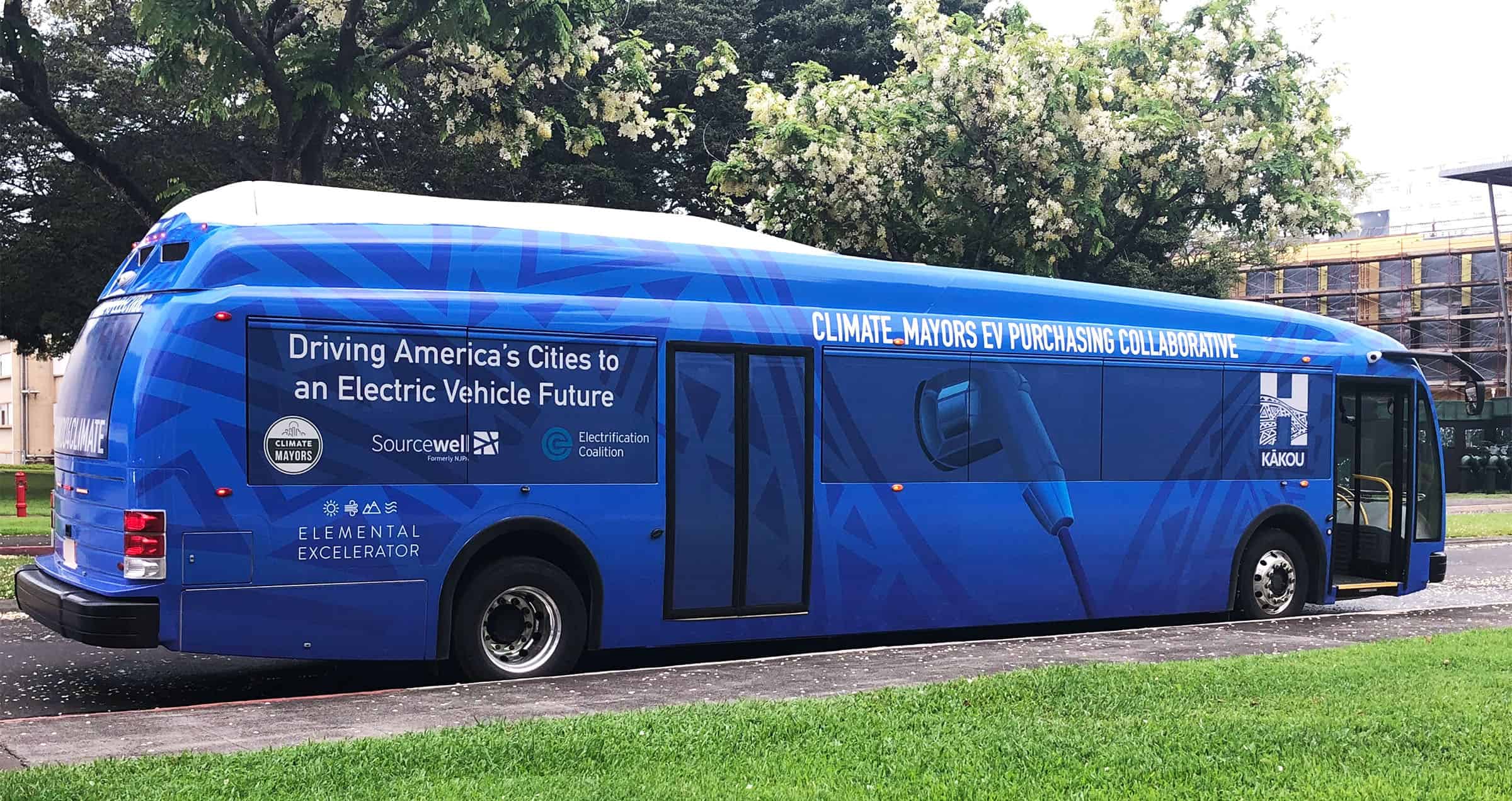 Today, at the second-annual Climate Mayors Summit in Honolulu, Hawaii, 127 cities and 15 counties from across 38 states joined the Climate Mayors Electric Vehicle Purchasing Collaborative, and committed to purchasing more than 2,100 electric vehicles by the end of 2020.

“The clean transportation revolution is not a distant vision for the far-off future — it’s a reality hitting the streets of Los Angeles and cities around the world,” said Climate Mayors Founder and Co-Chair Eric Garcetti. “By pooling our purchasing power, Climate Mayors are sending a powerful message to the global car market: if you build electric vehicles, we will buy them.

In 2018, Mayor Garcetti announced the launch of the Collaborative — an online portal that provides cities with a single, equal price for electric vehicles and charging infrastructure by aggregating the demand from Climate Mayors cities and other public agencies, along with expert policy and planning guidance. The number of cities has more than quintupled since that announcement — growing to more than 127 cities and 15 counties from across 38 states with a total commitment of over 2100 EVs by 2020.

Climate Mayors procurement partner, Sourcewell, will be releasing a new national solicitation for electric school buses by the end of the year. With more than 470,000 school buses operating across the country, lower prices and reduced administrative work will help school systems with smaller budgets provide their students with zero-emission transportation.

By transitioning city fleets to EVs, cities are leading by example: helping to cut greenhouse gas emissions that are warming the planet, saving taxpayer money, improving public health and reducing our nation’s dependence on oil. By the end of 2020, the EV commitments have the potential to:

“The electrification of Honolulu’s city and bus fleets will go a long way in making our island more sustainable and resilient in the face of the current climate crisis,” said Honolulu Mayor Kirk Caldwell. “However, it will also improve the natural environment for our residents and visitors by eliminating smoky exhaust fumes and noise pollution from our communities. By coming together under one umbrella with this EV Collaborative, mayors across the country are increasing the purchasing power of taxpayers while also showing love for Mother Nature.”

“Cities across the country are demonstrating critical leadership by committing to transition their fleets to electrification – reducing our dependence on oil, while also improving our nation’s health, and our economic and national security,” said Ben Prochazka, Vice President of the Electrification Coalition. “We hope other mayors around the country will see this as a call to action and plug their fleets into the Climate Mayors EV Purchasing Collaborative.”

In agreeing to purchase electric vehicles through the Collaborative, cities and counties gain access to competitively-priced electric vehicles and charging infrastructure, as well as reduced-cost leasing options through state and federal tax credits.

Launched in September 2018, the Collaborative is a partnership between Climate Mayors, the Electrification Coalition, and Sourcewell, a national transit fleet transition program that works with cities and other public agencies to accelerate the electrification of national ground transit fleets.